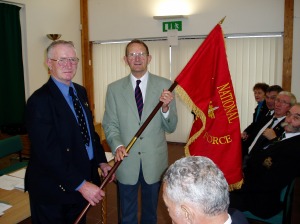 The HSF Association started in 2002 when Major (Retd) Albert Pryce-Howells, former OC of E (HSF) Coy 7th Bn Royal Anglian Regiment, based in Leicester made contact with a number of HSF veterans’ groups, mostly from within his own regiment, which also recruits in Lincolnshire, Norfolk, Suffolk, Cambridgeshire, Hertfordshire, Bedfordshire and Northamptonshire. He then found that similar reunions were being held by veterans of the Inns of Court HSF Signals Squadron in the City of London, led by Peter Rowe. Peter was in a position to make use of a disused pavilion at Bisley Ranges and joining forces, the Home Service Force Association was formed. This quickly spread to HSF veteran’s groups throughout England, Scotland and Wales. Under Peter’s chairmanship, Albert became Treasurer and Claude Ingham, of Leicester, became Secretary. Claude also dealt in HSF clothing and badges.  A senior Colonel formerly of the Inns of Court kindly agreed to be our President.

In 2002, Bisley Ranges became unavailable, mainly because the known original helpful contacts started to fade away, there was little sign of the “HSF Pavilion” being renovated, and annual weekend reunions (which had included full-bore shooting) were replaced by simple Annual General Meetings at the village pub in Monks Kirby in Warwickshire. Morale dropped a little.

During this time, a working party led by Major (Retd) David Edge, former OC of D (Sqn) Queens own Mercian Yeomanry, based in Telford, Shropshire, secured a plot at the newly created National Memorial Arboretum, Alrewas, Staffordshire, which was anxious to attract organisational interest and income. Assisted by Major (Retd) Guy Cockerton, also a former D Sqn OC, but who lived close to the NMA, Brian Turner, of D Sqn, and Clive Swatton, of E (HSF) Coy 6th Battalion Royal Anglian Regiment, based in Bedfordshire and Hertfordshire, managed the project including attracting the sponsoring of commemorative trees and bushes from member Unit Associations and Groups.

It was during this time that Peter Rowe announced his decision to move to Australia for business reasons. At this time, it was also announced that The President would be standing down. As Peter had created the first website and started research on a research project temporarily entitled “The HSF Book”.  Sadly, both projects came to an end. The Association Padre, Rev. Phillip Wallace-Pugh, a former HSF soldier in Leicester, took on the chairmanship on a temporary basis and offered to continue the HSF Book research, and actually succeeded in using it as a subject for his part time PhD course. Miraculously, help arrived with a website, created by Major Alan Mulder, former OC of E (HSF) Coy 2nd Bn The Wessex Regiment (Volunteers). Alan was, at that time Deputy Commandant, Surrey ACF. This improved website was able to attract more Units and Groups, and also individuals who had not known about the HSFA.

Brian Turner took over the Secretary’s job from Claude Ingham, who retained responsibility for clothing and badges. 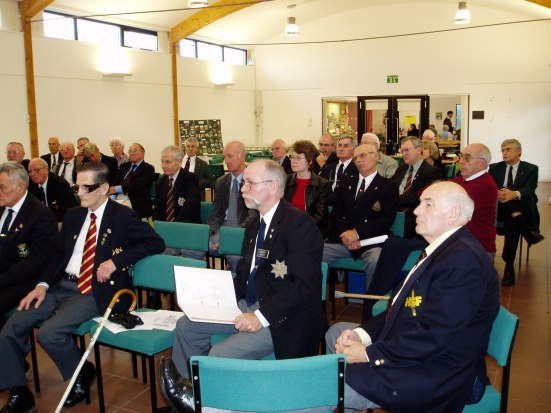 The HSF Grove was dedicated in May 2005, attended by a large number, including the three TA Colonels, formerly with responsibility for HSF matters. and at that time Colonel Mike Taylor agreed to become the new President. Col.Mike had been the second such TA Colonel. In his words; of the three, he didn’t raise the HSF, and he didn’t close it down.

In October 2005, The HSF Association returned to the NMA for its AGM, but their being no local affordable accommodation, this was a one-day affair and the HSFA needed stimulation, which came in the form of a weekend at an army training camp in Staffordshire, whose identity shall remain anonymous. Suffice it to say “left hand drive roads”? Brian managed to persuade the Commander 5th Division, based at Shrewsbury, to permit the HSFA to hold annal reunion weekends at this camp. Initially at a cost of £15 per head, HSF veterans crammed into the accommodation and from nowhere, cadet orientated activities were produced with a flourish, such as 25 metre range shooting using SA80(2) (or SA85), indoor simulated shooting with SA80, a tour of the Northern Ireland simulation range, a display of foreign weapons and a paint gun range. While prices rose year on year, attendance stayed high.

In 2010, it was announced that the Reunion venue charges, per head, had actually approached £50 per head, but charges had not covered this and sundry fund-raising over the weekend saved the day. The committee resolved to change this and during the winter period, Paul Hallett, of 3WFR in Nottingham, had accepted an approach to become interim Chairman, pending acceptance in October 2011. Paul set about analysing the income and expenditure of the Association and also identified its leadership weaknesses. In 2011, subscription rates were clarified and payment levels increased.

The 2010 Reunion weekend was dominated by an anniversary day trip to the NMA to celebrate the 25th year since the official raising of the HSF. Whilst this was well supported, the administrative cost was unpopular.

In 2011, Brian Turner announced serious health problems including major surgery, which had led to further serious issues in early 2012. The flow of newsletters to Units had been interrupted and this had made a difference.

The AGM in October 2011, not well attended, started with the fear that disbandment was imminent, however the atmosphere at the AGM was not only positive but resolute, that Unit members wanted the HSF Association to carry on, they wanted the AGM weekend to continue at the same venue and for activities to be provided in a “camp environment”.

2012 brought the handover of newsletter responsibilities from Brian Turner to Paul Hallett. Paul has also agreed a joint venture with Rev. Phillip Wallace-Pugh to share input into the restarting The HSF Book compilation. Phillip, now having his church as a major part of his life, will have more time to assist with this and The HSF Association, in general.

2012/13 will see a concerted effort to attract Units to the Annual Reunion weekend, and to present workable solutions to the AGM against a backdrop of increasing economic hardship and the increasing average age of HSF veterans.

Tell us your news Cancel reply