to announce its intention to disband the Association in its current form.

All Units (Local HSF Veterans’ Associations/Groups) will, by now, have

received a communication from Ivor Davies on behalf of the Committee.

The deadline is now passed for Phase One, which dealt with understanding

the suggestions and ideas put forward by Units. Phase Two will deal with

a Unit Vote* to decide how assets will be disposed of.

(* Only Units are members of the HSFA, Individuals cannot vote).

MORE DETAILS WILL BE POSTED IN DUE COURSE.

IF YOU SERVED IN THE HSF, PLEASE GET IN TOUCH.

IF YOU ARE A MEMBER OF AN HSF UNIT ASSOCIATION,

TO DISCUSS THE ISSUE.

HSF VETERANS WILL STILL COMMUNICATE AND

GATHER WHERE AND WHEN THEY CAN.

will be posted shortly.

This proved necessary due to factors beyond our control.
and became a on-day event, as in 2012.
The Chairman wishes to thank all those who attended
and all those individuals and Units which gave apologies.

There were insufficient number of HSF Veterans available to register for marching on the day, and that registration had to be submitted 14 days before the event. The small number who managed to submit their names, dates of birth and addresses (with postcodes) [No…. I’m not kidding] were all cap-badged WFR and so marched with The WFR Assn.

There was evidence that HSF Veterans all over the country supported their own local AFD events.

The Static Stand, however was staffed by :

Inside the Veterans’ Marquee is was possible to hear the elderly aircraft overhead, but only to guess their identity.

to all and sundry, and welcomed one or two local HSF Veterans, who seemed impressed. 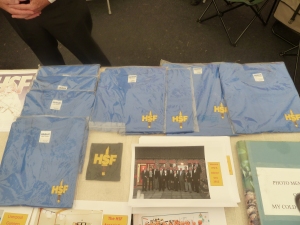 HSF Tee Shirts and a Blazer Badge on sale 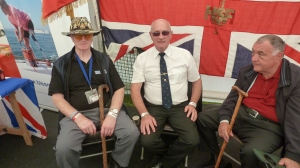 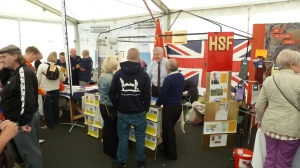 Who the hell are you lot?….We’re The HSF Assn Madam 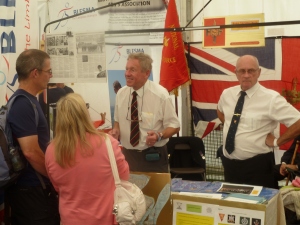 Richard lays on the charm, while Dave keeps a look out

The original HSF Association Lapel Badge – much sought after

Volunteer helpers on the day got a free badge.

HSF Veterans who visited the Stand were able to buy badges at a special price.

(a new price chart will be published in e few weeks) 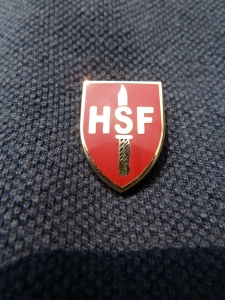 The new badge is identical to the old one, but has a red background instead of green. 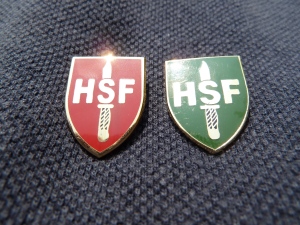 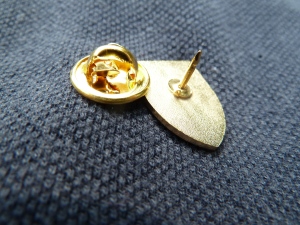 Same fastening as the old one.

Go to The Members’ Compound.